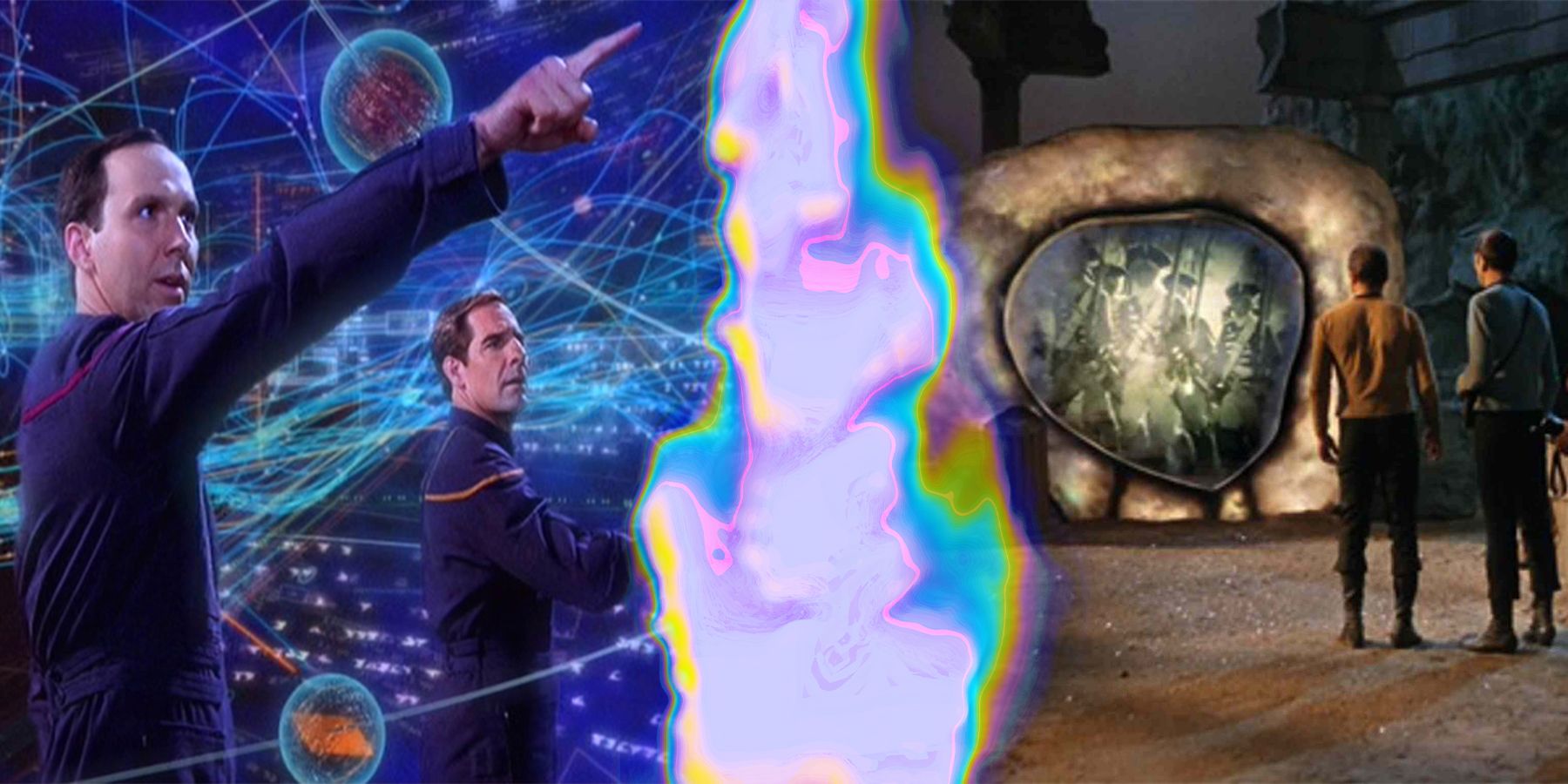 Visiting the past or taking a peek at the future has been a staple of science fiction storytelling and the best time travel movies since the creation of the genre. As one of the premier sci-fi television franchises of all time, Star Trek has often journeyed through the proverbial temporal rift for a spirited time travel story.

RELATED: 5 Sci-Fi Movies That Do Time Travel Perfectly (& 5 That Messed It Up)

Some of these plots have been pure story-telling gold, presenting interesting scenarios with compelling rich characterizations and gut-wrenching drama. Unfortunately, other episodes were riddled with horrible plotlines and an unsupportable internal logic, making the story dull for some viewers or inconsistent with the rules of time travel.

In terms of great time-travel Star Trek adventures, First Contact may not be the most dramatically tense, but it was definitely entertaining. Star Trek rarely goes full-on action flick, but when it does, it does it well. This is especially true when you factor in the Borg traveling to a post-World War III Earth to kill Zefram Cochrane before he can initiate his first warp flight and make first contact.

RELATED: 10 Reasons First Contact Is The Most Underrated Film

Additionally, the film proved significant by introducing the character of the Borg Queen, exploring Captain Picard’s simmering anger at the Borg for his own assimilation, and becoming the most widely-lauded Star Trek film since Wrath of Khan.

Not all the Next Generation films were as successful as First Contact. Their first outing, Generations, was generally thought by critics to be a bloated mess of a film, whose plot seemed to be window dressing around the idea of somehow getting Captain Kirk to teach Captain Picard how to kick some ass.

As every Trekkie knows, there are roughly 80 years between TOS and TNG, so the way the writers managed to get Kirk and Picard in the same place at the same time was to use a magical interstellar dust cloud called “The Nexus.” To say this was an anti-climactic deus ex machina that defied the conventions of sci-fi time travel is a gross understatement.

Star Trek: Deep Space Nine usually carries the reputation of being the “black sheep” of the Star Trek series, as it focuses less on the future as a bright utopia and more on darker themes centered around flawed characters. The series also produced some of the most dramatic time-travel yarns in Trek history, like “Past Tense,” “The Visitor,” and “Children of Time.”

RELATED: Which Star Trek Deep Space Nine Character Are You Based On Your Zodiac?

But the episode “Trials and Tribble-ations” is especially noteworthy in that it broke DS9’s mold for dark and somber storytelling by revisiting an Original Series episode in a light-hearted and humorous way. As well, the seamless melding of DS9 actors into footage shot in the ‘60s is still a marvel to behold today.

Although Deep Space Nine set the bar for time-travel storytelling in Star Trek pretty high, it wasn’t without its duds, as the episode “Time’s Orphan” attests. Here, a picnic on a planet’s surface for Chief O’Brien and his family takes a turn for the worse when his eight-year-old daughter, Molly, falls into a nearby temporal rift. Transported 300 years into the past, some transporter trickery brings Molly back to the O’Briens – but as a feral 18-year-old.

Although a somewhat interesting premise, it is obvious to the audience that the writers would never let anything horrible happen to a child, so eight-year-old Molly’s return at the conclusion of the episode was not only anticipated but anti-climactic.

Like Deep Space Nine, Star Trek: Voyager had its fair share of hits and misses with its time travel episodes. Its best offerings came in two-part episodes, which allowed writers to really explore concepts and flesh out the stories. Although “Future’s End” is notable for catapulting Voyager back to the year 1996, “Year of Hell” is notable for having put Captain Janeway and her crew through the wringer.

Kurtwood Smith sets the bar for guest stars by playing Annorax, a Krenim temporal scientist who wishes to restore his people to prominence by weaponizing time itself. Unfortunately, Voyager is caught in his wake, to horrifying results.

By all accounts, Star Trek IV: The Voyage Home, was a successful film. It was entertaining, financially successful, had a relevant social message, and was chock-full of humor and classic Trek moments. But as a time travel story, it had some serious flaws.

Notwithstanding the ludicrous way the Enterprise command crew ventures to and from the past with pinpoint accuracy, the gross violations of the space/time continuum they commit along the way are difficult to accept. It’s hard to determine which is the worst offense: giving an engineer the formulas for future technology, saving the life of a hospitalized woman who was destined to die, or transporting a prominent marine biologist from the 20th century to the 23rd.

Some of the best time travel stories revolve around one event, that if meddled with, changes the course of history. In the Next Generation episode, “Yesterday’s Enterprise,” that event is the Battle of Narendra III, where instead of being captured by Romulans attacking a Klingon outpost, the crew of the Enterprise-C passes through a temporal rift into the future.

The alterations to history were drastic, as the Federation was engaged in a war with the Klingon Empire and Tasha Yar had not died on Vagra II. Captain Picard’s decision to send Tasha back through the rift with the Enterprise-C would have massive personal and political ramifications as the series progressed.

“Time’s Arrow,” closed out season 5 and opened season 6 of Star Trek: The Next Generation. Starting with an interesting mystery, the Enterprise is summoned to Earth when the 500-year old head of Lieutenant-Commander Data is found in a cave near San Francisco.

The opening bumper sets up a pretty cool predestination paradox that sees Data and the command crew of the Enterprise visit the 19th century, but the villains of the episodes make digesting the plot exceedingly difficult. Time-travelling, soul-sucking aliens with canes disguised as snakes is a tad campy, and much more Doctor Who than Star Trek.

2 Best – Star Trek: (The Original Series): “The City On The Edge Of Forever”

The golden standard by which all Star Trek time travel stories are measured will always be The Original Series’ “The City on the Edge of Forever.” Following a crazed Doctor McCoy, as he travels back to 1930’s New York City, Captain Kirk and Mr. Spock discover that somehow, the good doctor has erased history as they know it.

Eventually figuring out that the timeline focused around a social worker named Edith Keeler, Kirk had to allow the woman he loved to die to allow the timeline to right itself. Filled with emotion, pathos, and a great character in the Guardian of Forever, this episode was an instant classic.

On paper, The Temporal Cold War must have seemed like a good idea to the writers of Star Trek: Enterprise. As ratings sagged, a shot in the arm that drew upon the wealth of lore established by previous series, as well as several mysterious antagonists from the future, must have seemed like a sure-fire solution to lagging viewer interest.

NEXT: Star Trek: The 10 Greatest Redemptions


Next
Gilmore Girls: 8 Characters Who Left The Show Too Soon

Julian Beauvais has been a full-time educator for the last 15 years and a part-time content writer, editor, and proofreader for several online companies for the last 7.