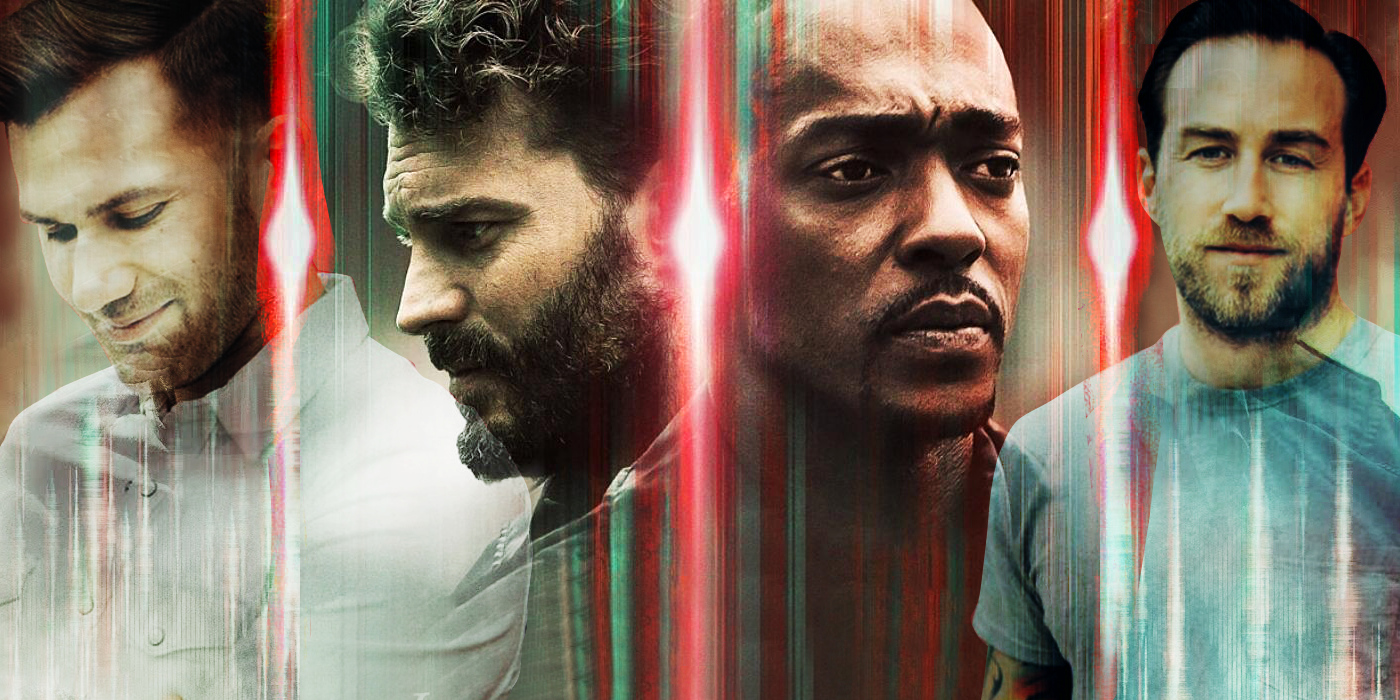 Synchronic isn’t necessarily a movie where you need to understand the layered backstory to know it’s just a jaw-dropping slice of modern-day sci-fi. Writer/director duo Justin Benson and Aaron Moorhead mostly avoid the pitfalls of time travel storytelling in their tale of two New Orleans EMTs—father-of-two Dennis (Jamie Dornan) and ladies’ man Steve (Anthony Mackie)—who comes across a dangerous new designer drug, Synchronic, that sends the user on a seven-minute trip through time. The main side effect being, of course, that the past is full of horrific, deadly stuff. This one guy gets stabbed with a pirate sword. It’s all very terrifying. While Synchronic isn’t a perfect film—Steve’s pineal gland loophole is as convenient as they come, and any film that still makes doesthedogdie.com a necessity is docked a few points on sight—Benson and Moorhead do a fantastic job grounding their heady sci-fi horror in human stakes. Dennis, who can’t time-travel, still feels unmoored as he loses his family; Steve, whose unique condition allows him to take the drug to its full potential, is a Black man living in the American south who knows what it is to be unwelcome in any time. The film absolutely works as a standalone, which is kind’ve nuts when you consider all that Benson and Moorhead fit into it.

But you wanna hear something real nuts? Synchronic is also the fourth entry in a connected indie universe that Benson and Moorhead have been quietly building since 2012’s Resolution, one that also includes Spring and The Endless.

The key to understanding Synchronic‘s link to the past comes in the scene in which Dr. Kermani (Ramiz Monsef) explains, well, the drug Synchronic’s link to the past. The genius of Benson’s script is that it offers just enough of a scientific explanation without getting lost in the weeds. The drug affects a person’s pineal gland—the little pine cone at the center of our brains that produces melatonin, which in turn regulates our biological clock—allowing the user to “experience time as it actually is, rather than the linear, one event after another way we normally experience it.” You buy this because Synchronic doesn’t dwell on it, focusing instead on how it relates to Steve’s journey. But then Kermani offers up one more blink-and-you-miss-it detail, describing the drug as “a DMT-like drug that we synthesized from a red flower that only grows in a very isolated region in the California desert.”

That red flower is at the heart of The Endless, and if you haven’t caught that 2017 sci-fi horror gem yet—and I highly recommend you do—this is where I’d hop out for now. This time around, Benson and Moorhead also star as brothers who escaped what they thought was a UFO death cult as kids. As adults, they return to the “very isolated region in the California desert” the cult occupies to see if their memories are as insidious as they remember. What they find is an ageless but mostly chill community that brews beer, smokes that mysterious red flower, and, whoops, is under the influence of a malevolent Lovecraftian force that’s been trapping people in time loops for the fun of it since the Big Bang. That entire isolated region of the California desert is not much more than a bundle of time-loop bubbles situated next to each other—all different lengths, all different sizes—the borders marked by eerie, gnarled signposts. (You can spot one of those posts in the hands of a Shaman Steve encounters in Synchronic, underneath the multi-moon that signifies the malevolent entity of The Endless.)

The Endless also acts as a bit of an explainer/surprise-semi-sequel to Benson and Moorhead’s very first feature, 2012’s Resolution. (Again, spoilers to follow.) A graphic designer named Michael (Peter Cilella) travels to an isolated cabin to try and save his former best friend, Chris (Vinny Curran), from drug addiction. The two men quickly realize everything that’s happening at that cabin is under the control of an unseen antagonist, manipulating their story to its own violent whims. Resolution leaves the antagonist unexplained, but five years later The Endless returns to that cabin. While navigating the various looped bubbles, Justin comes across Michael and Chris living out their own violent ends again and again, revealing that the plot of Revolution is yet another sick, sad story orchestrated by the dickhead diety of The Endless.

RELATED: ‘The Endless’ Filmmakers on Their Trippy Mythology & Deciphering That Ending

[The connection is much thinner when it comes to Benson and Moorhead’s second feature, Spring, a body-horror romance about a man named Evan (Lou Taylor Pucci) who travels to Italy and meets a woman (Nadia Hilker) who is definitely not what she seems. In The Endless, a member of the cult simply mentions a friend named Evan who traveled to Italy and wasn’t heard from again. However! Spring is arguably Benson and Moorhead’s best movie to date and you should absolutely track it down.]

The beauty of this little sci-fi horror shared universe is in its subtly. Taken alone, all four films work as a contained section in the filmography of two very exciting filmmakers, churning out the type of original high-concept stories we don’t get enough of anymore. You can watch Synchronic on its own and still buy into the scientific explanation of it all. Or, you can take The Endless as a companion piece and ponder whether there’s a supernatural, Eldridge edge to what’s happening in New Orleans, a sinister puppeteer guiding Steve’s noble intentions. It adds a depth worth diving into, making a rewatch of each movie essential. (Based on everything Benson and Moorhead have said, there are still countless connections I’ve missed.)

Next up, the filmmaking duo is leaping from their own shared universe into the largest one ever constructed, the Marvel Cinematic Universe, as they direct a handful of episodes of Moon Knight for Disney+. Surely, the Marvel umbrella doesn’t offer a ton of room for explanation. But, you know, just keep an eye out for any red flowers.

Am I excited for the return of this series? “Signs point to yes.”

Vinnie Mancuso is a Senior Editor at Collider, where he is in charge of all things related to the 2018 film ‘Aquaman,’ among other things. You can also find his pop culture opinions on Twitter (@VinnieMancuso1) or being shouted out a Jersey City window between 4 and 6 a.m.

The premier source for general