What to Know About the Demon Slayer Movie 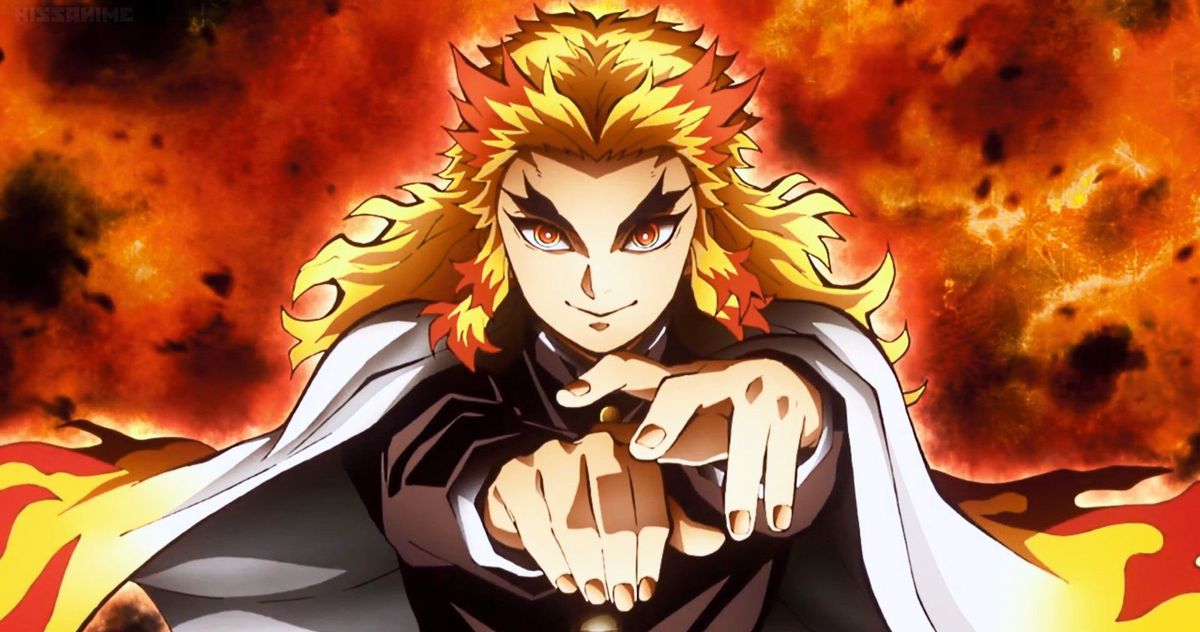 No matter what Christopher Nolan may have wanted you to believe, the movie that saved the box office last year wasn’t Tenet but an anime film titled Demon Slayer: Kimetsu No Yaiba the Movie: Mugen Train. In a year without Marvel movies, this sequel to a popular TV anime became the fastest film to earn over $100 million at the Japanese box office, the highest-grossing film ever in Japan, and the No. 4 film at the overall global box office, just ahead of Nolan’s time-travel thriller — all while playing only in its home market and a handful of Asian countries, but excluding the juggernaut that is China.

What makes this accomplishment even rarer is that Mugen Train is not just a film based on an anime TV show — it’s the middle chapter in an ongoing story that will continue with a second season of the series, rather than a side story newcomers can watch without much prior knowledge of the franchise. This means that if you’re planning to catch Mugen Train when it hits U.S. theaters this weekend, you probably do need to catch up on Demon Slayer first. If that’s you, then it’s worth taking a step back to better understand what the big deal is.

Okay, so what is Demon Slayer?
Before it was a film or anime, Demon Slayer was a manga, created by Koyoharu Gotouge and released in 2016. Set during Taishō-era Japan (1912-1926), it follows a young boy named Tanjiro in his quest to join the secret society known as the Demon Slayer Corps in order to find a cure for his sister, who has been turned into a demon. Unlike most anime series based on preexisting source material, Demon Slayer did not have a huge built-in audience ready to make the anime adaptation a hit. On the contrary, it took a few years for the manga to become a big success. In a review from 2018, Rebecca Silverman reviewed the first volume of the manga for Anime News Network, and even though she praised the lore and the sheer empathy shown by the main character, Silverman also criticized Gotouge’s art as “largely unpolished and inconsistent.”

This is not to say that the manga didn’t show signs of greatness and promise, not the least of which was the Taishō-era setting, which offers a glimpse at a version of Japan we rarely see in media. Electric lights and cars filled the streets, but there were still those in the countryside that had never seen a train before, making this the perfect setting for a show about a secret group of swordsmen fighting monsters that most people don’t even believe in. Demon Slayer is one of the few anime and manga that is unapologetically Japanese, from its culture to its history and even its fashion.

Things really picked up when Demon Slayer became an anime. At a preview screening in 2019, Jacob Chapman wrote for Anime News Network that the show was “going to be one of the biggest anime of not only the spring season but maybe the whole year, and it completely deserves all the attention.” The first few episodes slowly but surely take the known and overdone formula for shonen anime (basically the anime/manga equivalent of the YA genre) and tweak it enough to make it feel fresh without actually reinventing the wheel.

Demon Slayer stands out among other shonen anime for the way it dips into the horror genre. Yes, we’ve seen plenty of dark and grim anime before, and there is the occasional horror-like villain, but it wasn’t until manga and subsequent anime adaptations like Death Note and Attack on Titan that shonen anime started using horror imagery and gory deaths to keep audiences hooked. Demon Slayer follows this trend by using gore and body horror to highlight Tanjiro’s journey of facing great dangers and seeing what can happen to his sister if he fails his quest. But the show also mixes in a delightfully morbid sense of humor. While Tanjiro’s story is emotional and full of pathos, his sister, Nezuko, is often used for comic relief, and because she’s also a demon, she’s prone to jumping in at the last minute to save Tanjiro by, say, suddenly decapitating a monster’s head with a single kick.


Furthermore, Tanjiro is a rare shonen protagonist who isn’t in it for glory, power, or vengeance; what makes him truly special is how much empathy he shows for all living beings. The first time Tanjiro fights a demon, he can’t bring himself to cause it suffering, no matter how much suffering the demon has caused. Where other shows might make their protagonist learn to suck it up and build character because there are more important things to think about, Tanjiro never really stops feeling sorry for the demons he slays. There’s a profound sadness to Tanjiro when he kills a demon, not relief. He still knows he can’t let them live, but he acknowledges they were once human, and if he’s going to save his sister’s humanity, he can’t afford to lose his.

But what made Demon Slayer such a big deal?
Simply put, the animation. Demon Slayer is Studio Ufotable’s first foray into a mainstream shonen anime, and it is a hell of a debut. The studio is renowned for its use of CG to achieve dynamic camera work that simply cannot be replicated in hand-drawn animation. Where the manga would paint a static picture of a cool moment in simple terms before focusing on a single panel that shows what makes that fight important, Ufotable’s adaptation takes in all the implicit elements of the page and turns them into a series of beautiful paintings you could easily screengrab and frame, while making each fight look unique from the rest.

This culminated in episode 19, when the show broke anime Twitter with a remarkable sequence that blew away any expectations one may have about what is possible in a TV anime. Ufotable took a fairly short and unremarkable moment in the manga and turned it into the kind of emotional and visual climax you’d typically expect from a show after a couple of seasons, not in its debut year. From stunning CG animation that references real movement in a way that resembles rotoscope, to the use of bright colors and fluid movements, to Nami Nakagawa’s insert song “Kamado Tanjiro No Uta” turning up the emotions to 11, this is the moment that catapulted Demon Slayer into a cultural phenomenon, and the kind of watercooler conversation-starter typically reserved for live-action shows like Game of Thrones in the west.

So where does the movie fit into things?
Even before the first season of Demon Slayer had ended, a movie was already ordered by the show’s production committee, meant to adapt the next arc in the manga — the Mugen Train arc. Episode 26, which serves as the season finale, ends with Tanjiro getting a new assignment to investigate a demon attack on a train — kind of the show’s take on Murder on the Orient Express, but with fewer mustaches.

Now, it’s not unusual for anime shows to get the feature film treatment — One Piece has had 14 in the past two decades — but they are mostly original stories that sort of tie into the show. Likewise, neither one of the two My Hero Academia movies from the past couple of years is considered canon for the main show. This is where Mugen Train differs, because unlike other movies based on TV shows, we know the show will pick up after the events of the movie. This is not ALF, or Firefly, or even Breaking Bad, all of which had their stories wrap up in a feature film. The closest U.S. TV analogue would be Veronica Mars, which got a feature film after the original series had ended, only for it to continue with the fourth season.


And then the movie was also a big deal, right?
That’s putting it mildly. Mugen Train was one of the first films to open in Japanese theaters with relaxed pandemic restrictions, and audiences flooded cinemas to go see it. In its opening weekend, the film shattered the all-time opening records at the Japanese box office, grossing nearly three times what Frozen 2 did in its record-breaking opening weekend. Deadline reported that some theaters were playing the film “up to 40 times per day.” The Mugen Train had left the station, and there was no stopping it.

The film has been praised by critics for its animation and LiSA’s record-breaking song for the film, “Homura.” Of course, the moment the film started breaking records, interviews started coming out with the directors whose record-breaking films had just been surpassed. Your Name filmmaker Makoto Shinkai praised Mugen Train’s ability to be so successful during a pandemic, saying “Nobody could have anticipated that in the year of 2020, where people were made to avoid gathering in one place, that Japan’s box-office records would get overwritten” and that the film’s success taught him “the importance of stories.”

So what happens next?
Unsurprisingly, season two of Demon Slayer has already been announced for some time this year. Now that the manga has finished (to record-breaking sales, naturally) the anticipation for new episodes is through the roof. The true impact of Mugen Train, however, lies in the still open question of whether it will create a trend of TV anime shows continuing their story in theaters. Earlier this year, it was announced that popular shonen show Jujutsu Kaisen would get a feature film prequel, while rumors floated around that the mega-popular Attack on Titan would end its run with a film, before more episodes were announced last month.

In any case, Mugen Train is pulling into the station in North America, and while it remains to be seen whether it will manage to find the same level of success Stateside, Demon Slayer’s unpredictable success thus far has proven it’s a franchise not to be underestimated.