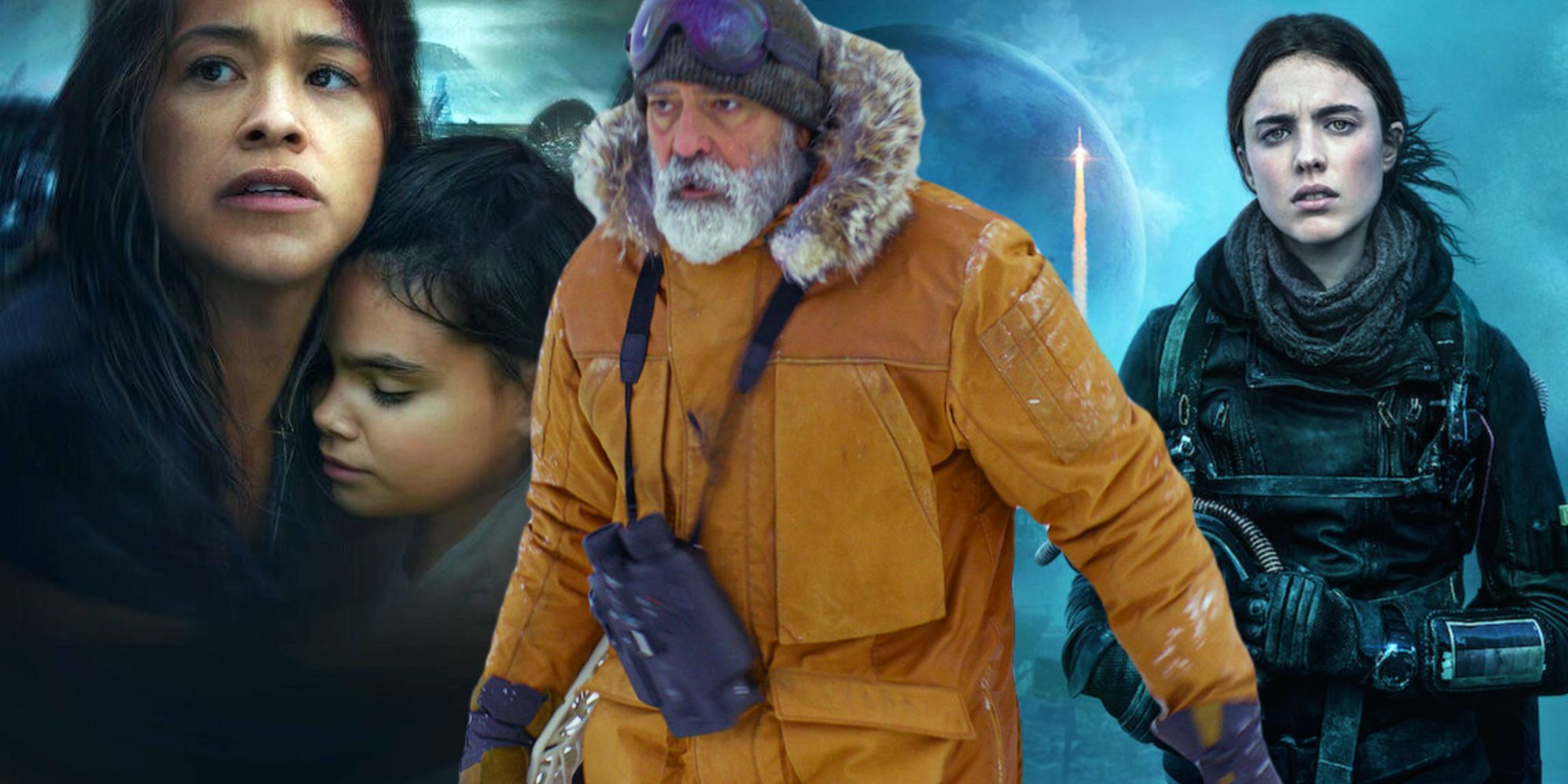 Netflix has released a sizeable number of sci-fi movies over the course of the year, but have they worked in terms of quality and suspension of disbelief? 2020 was an unconventional year for science fiction flicks, as the pandemic created a unique vacuum that allowed under-the-radar projects like The Vast of Night and Synchronic to bloom. With blockbuster sci-fi franchises like Dune and The Matrix 4 slated to release and take off later this year, it will indeed be difficult for Netflix to create projects with the same amount of thrill and anticipation, although some exceptions exist.

While all kinds of cinema seem to function as a gateway to an alternate reality, removed from the stresses and cruelties of our immediate reality, science fiction has always been an escape route like no other. An element of magical realism, combined with the unimaginably fantastical, drives the genre forward and provides an unstated sense of catharsis to viewers. This, in conjunction with an overwhelming anxiety about technology and the future, creates solid Netflix entries such as I Am Mother, which delves deep into the psychological paradox of motherhood in an uncharacteristic manner.

However, despite a handful of promising entries, Netflix’s sci-fi genre has proffered projects that come off as rather dull in comparison to, for instance, the action/thriller genre, which saw explosively popular movies like The Old Guard and Army of the Dead earlier this year. Is the sci-fi genre trapped in a cycle of hackneyed concepts, exacerbated by the unwillingness to stay true to the scientific aspects of key concepts? Here’s an extensive dive into Netflix’s sci-fi efforts and how they’ve been received, along with the reasons why they might not have worked in the bigger scheme of things.

Netflix Has Made A Lot Of Sci-Fi Movies

The sci-fi and fantasy subgenre on Netflix is rife with many entries that span various aspects of the genre in divergent ways. Seminal among them is Bird Box, which, despite an enthralling premise, garnered mixed reviews from critics and audiences alike. However, the film’s explosive popularity underlines the importance of atmospheric horror, one that is hinged upon audio-visual cues and frenetic suspense. This does not erase the fact that sci-fi entries like Bird Box are limited by their own narrative shallowness, unable to match up to the potential of its premise due to the lack of genuine emotional stakes.

On the other hand, Netflix’s 2021 psychological survival horror, Oxygen, wowed audiences with its taut, intense pacing and masterful usage of claustrophobic spaces. One of the reasons that can be attributed to the success of Oxygen is the eerie way in which it mirrored our immediate reality, wherein the cruelties of the pandemic left millions gasping for air, whilst struggling with the notion of what it means to survive as a human in a world ravaged by death. These themes are expertly woven into the central narrative of Oxygen without coming off as too on-the-nose or pretentious, which works in favor of the film. Between the extremes of well-crafted post-apocalyptic films like Annihilation and total misses like iBoy, lies a mishmash of sci-fi and adventure genres, leading to delightful experiences of the likes of the genuinely entertaining Love and Monsters, and the brutally underappreciated Mute.

A plethora of factors can be attributed to why Netflix sci-fi movies have not worked the way in which they are supposed to, prime among them being the sudden boom in streaming and the constant pressure to churn out binge-able content. Understandably, there has been a prioritization of quantity over quality, along with the rehashing of clichéd tropes and narrative themes. A prime example of the same is George Clooney’s The Midnight Sky, which functions well as an emotional saga punctuated by both hope and despair, but thematically borrows too much from its predecessors and fails to invest meaning into the lives of its titular characters. The same can be said about IO: Last on Earth, which delves into the themes of post-apocalyptic survival and space colonization – themes that have been done to death and run the risk of being exhausting if not infused with fresh perspectives. While IO excels in terms of visual scale and grandeur, it falters deeply in terms of its core characters, and what drives them forward within the ambit of this proverbial Adam and Eve parable.

RELATED: Why Sci-Fi Movies Are So Divisive At The Box Office

Unoriginality aside, most of Netflix’s sci-fi offerings suffer from the utter absence of scientific accuracy, which is almost always manifested in the form of wobbly time travel movie principles and how humans act in space. Apart from this, the concept of “a race against time” thrillers such as Awake does not work well when propped up by a shallow understanding of catastrophic disasters and an inert treatment of pressing global crises. At the same time, it is important to acknowledge the inherent unfairness of weighing sci-fi narratives solely against scientific accuracy, as it would invariably invalidate the premise for 99{108b30f3c06264e1328e4bfc86b32bcda3f89fafc9334ae3e7f22518df671a2e} of such narratives. However, a certain amount of dramatic believability must accompany the central plot, along with compelling visuals and solid storytelling, without having to resort to poorly thought out plot devices or rushed deus ex machinas. This is done fairly well in films like Stowaway and Mobile Suit Gundam: Hathaway, which brim with an equal amount of action, suspense, and heart.

How Netflix Can Fix Its Sci-Fi Problem

It is important to acknowledge that Netflix has, without a doubt, churned out spectacular sci-fi movies over the years, notable ones being The Platform, Spectral, and Arq. Nevertheless, there is much room for improvement, especially in the manner in which such narratives are crafted in the first place, mostly taking place in post-apocalyptic landscapes and deep space voyages bereft of thrill or originality. Perhaps, much inspiration can be taken from certain indie sci-fi offerings of the year, seminal being Christopher Soren Kelly’s The Tangle, which enmeshes the threat of technology and the beauty of poetry in an uncharacteristically interesting way. Apart from this, much remains unexplored in the realm of cosmic or Lovecraftian horror, wherein genre boundaries can be pushed without having to resort to the lull of the familiar, as the concept of the great unknown holds massive possibilities.

While Netflix has a wide array of sci-fi movies on their way for later this year, it remains to be seen whether these offerings are able to add fresh perspectives to an already overflowing cinematic genre. Potentially promising yet-to-be titles such as Spaceman of Bohemia come to mind, as its wonderful narrative about solitude and longing, one that can be beautifully translated to the big screen. It might also be fruitful to wait for sci-fi comedies such as the soon-to-be-released They Cloned Tyrone, which delves into nefarious conspiracy and eerie experimentation centers. Another possibly thrilling offering could be Joseph Kosinski’s Escape From Spiderhead, which is said to dive into the premise of mild-altering drugs and their effects on human consciousness. Whether Netflix is able to step up its sci-fi game in the future remains anything but transparent – but if there’s one thing the genre itself makes clear, it’s that anything can happen in the future.

NEXT: The Mitchells vs. The Machines Just Fixed Netflix’s Big Sci-Fi Problem

Debopriyaa Dutta is a content curator, poet, and film critic based in India and a frequent contributor for High On Films. Apart from being a published author, Debopriyaa has been writing professionally since 2014, and holds a Master’s degree in English Literature and Theory from the University of Delhi. An ardent fan of cosmic horror and poetic cinema, she enjoys painting, along with reading literary works steeped in morbid nihilism.

Happily family ever after